Hello everyone! As you might have noticed the past week my blog has been a little bit more quiet than the previous three weeks. In fact it’s gone deadly silent. I even did not comment as much as I normally do, for which I apologise. This pretty much means only one thing really: my vacation is over and I’m back at work. The first week has been especially bad and very busy, also considering the fact that I had to work on saturday. But enough complaining about that, it’s now sunday, and I finally have time to write again. So I thought it would be a good idea to complete the request made by Arthifis (You all still know him right? Great guy, and he started writing a book as well: that is so awesome!). Anyways in case you missed the first part, he requested I make a list of some of my favorite solo boardgames. Here in part two I’m going into my personal top five. Not only are these games great to play alone, they really are some of my alltime favorite games period. 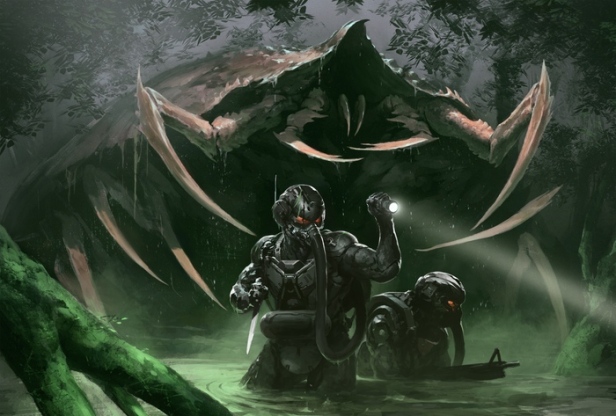 Just one more thing: again I would like to point out my favorite Youtube Boardgame Channel: The Vitruvian Gamer. This week he has also started a new feature on his channel as well, where in small 7-10 minute segments he talks about boardgames, the channel, and life in general. It really is a great place to visit. A few of the games listed below have been featured on his channel, and as I pointed out in part 1, he really is a great host as well. Always kind, and with very insigthful and fun to watch videos it’s a great way to spent some time on Youtube. And hey, you might even end up discovering a new game that you would like to try out as well, so how cool is that. Below is one of his videos for a game that I will talk about later on in this post. Okay, enough talking, let’s get cracking!

Ascension is a deckbuilding cardgame. Yes, that sounds like a really difficult term, but it truly isn’t. A player starts out with a relatively weak basic hand of cards. During the course of the game, you can buy new cards with the weaker ones and add them to your deck of existing cards. In this way you can make your deck more powerful. Ascension takes place in a fantasy world, and when you play the game solo you are basically fighting against an unseen opponent. By defeating monsters, and aquiring new cards you have to try and gain more points then your foe before the game ends. The fun thing about Ascension is that is a really simple game to learn (about 5 minutes), and there are now a lot of expansions as well. But, each set released stands on it’s own. In other words you can combine all the sets, or just play with one set. This offers a lot of choices, while at the same time it won’t overwhelm new players which is nice too.

This is another deckbuilding game, so it uses the same mechanics as above. But, this one comes with a neat twist. Set in a science fiction universe, and a quite horrible one at that, Xenoshyft Dreadmire allows you to play as the commander of a base from the Nortec Corporation. This company mines planets for a new and powerful energy source. However this energy source has a dangerous side effect as it turns the native animals into horrible monsters. During the course of nine rounds, that become ever more difficult, you have to defend the base from these creatures. This game is tough as nails, and very hard to win. But despite that fact it’s enormously fun to play. The artwork alone should be enough to sell you on buying it. If you like a good challenge this is the one to look into! More info on this game be found in my review.

Elder Sign is one of the best games that I have ever played. It’s a fusion between a dice and a cardgame and it’s an absolute joy to play. You take on the role of an investigator, that tries to stop an ancient evil from awakening and plunging the world into darkness. The base game takes place in an old museum, where you are desperately trying to find the so called elder signs. Depending on which Ancient One you are trying to defeat, you have to discover a set amount of these tokens, before time runs out. Using dice, you explore rooms in the museum, where you try to overcome traps, monsters, and other unspeakable horrors. By investigating rooms, you can find new weapons, spells, clues and other stuff to make you more powerful, as well as the elder signs themselves. As the game has an enormous amount of cards, and the set up is different each time, the game has tremendous replay value. With a lot of expansions having been released for it as well, you will not get bored by this game anytime soon.

Legendary and Legendary Encounters are all deckbuilders (yes again), but are also a blast to play. Legendary is probably best known for it’s Marvel sets. With a huge amount of available cards for these now, you put together your own superhero team in order to fight against one of the villains from the Marvel Universe. Ever wanted to have a team up between Wolverine and Iron Man? Well now you can achieve this. But Legendary has more to offer. In Legendary Encounters you can play through some of your favorite science fiction movies and television series. There are now sets for Aliens, Predator, Firefly and an upcoming one for The X-files. What differs these sets from their Legendary counterparts is that you actually play through scenarios from the movies and shows themselves, which is a lot of fun especially if you are a fan of these. Variety is the keyword here, as the normal Legendary has also games for cult movie Big Trouble in Little China as well as the television series of Buffy the Vampire Slayer.

So why is this game my number one? Well, the simple answer would be just read my Eldritch Horror review. But that would be cheating. This game is pretty much the bigger cousin of Elder Sign. Travelling around the entire world, you have to discover enough clues to find out what kind of ancient evil is trying to take over the world. You explore cities, ancient ruins, tombs and all kinds of other places. Narrative cards explain what exactly happens to you when you enter a certain place. And this is what makes the game so much fun to play. It sometimes feels like you are starring in your own adventure/horror movie. Every game is different, and has both strategy elements to it, as well as luck in the form of dice rolls. It’s by no means an easy game to win, and it takes a bit of time to set up. But other than that it’s always been the game that I have really enjoyed the most playing solo.

So, there we have it. Now this list is by no means complete, and there are games still lurking around in my collection that I haven’t even played yet. So maybe, there are other games that are even better than these. I certainly have a number of other suggestions too, that didn’t make the cut. So if you want even more options do take a look around at the boardgame section of my blog. As always thank you for reading!