If there is one thing that I find amazing about running my blog it is getting nominated for awards or particular tags. It is always an honor, but I must also admit that I am really, really running behind on writing these. So first I want to offer my apologies to everyone who has ever nominated me for an award or tagged me in some way, and I haven’t done a post for yet. Don’t think I don’t appreciate it, it is just simply me  not having had enough time to post one yet. That said, I am going to try and put a dent in the backlog of these over the coming weeks, and to kick things off I am going to start with the Five Flaming Hotties tag. I actually got nominated for this one twice, but that offered me a unique opportunity as well. I’m going to be doing this one in two posts, one featuring Five Hotties from the world of movie and television, and the other one from Anime.

The first tag I received from Vinnieh who is just an amazing guy. He actually runs two blogs (seriously where do you find the time for it 😂) one about movies and one that is a bit on the naughty side, lol. He is a terrific writer, with a knowledge about movies that I am often amazed at. But he is also a really kind person, who always responds to your comments in amazing ways. It has really been a blast following along with his blog and exchanging comments with him. So Vinnieh my friend, thanks for tagging me for this one.

The second tag I recieved from The Otaku Judge. You know how you sometimes want to slap yourself on the head for not discovering a blog sooner? This is one of them. For almost two months now we have been exchanging thoughts over different kinds of things, ranging from anime to movies, and it has been a blast. Another person who has just been a joy to talk to, as well as becoming someone who always provides interesting and often funny comments to my posts. Hopefully this will continue for many more years. So thank you very much as well.

Needless to say follow both of them, as if that hasn’t become clear yet 😂

1. Mention the name of the blog you were tagged by, as well as the creators of this game Realweegiemidget Reviews and Thoughts All Sorts  to all blogs involved and including the picture above.

2. List five of your greatest hotties from TV and/or film, i.e. crushes/objects of your affection, including musicians or sports stars too.

3. Tell us how you were introduced to them and why you like them/what appeals.

I was first introduced to the beautiful Morena Baccarin in the tv series Firefly. This shortlived and sadly cancelled tv series  was a unique blend of Western abd Science Fiction. Morena has since then grown into a well known figure in many tv series including Homeland, the re-imagined V and Gotham. Her natural charm and charisma make her an absolute stunning woman, especially when she puts on her wonderful smile. So to not include her on this list would be a sin.

This actress is probably not recognised by many of you, unless, like me you are a massive Walking Dead fan. Alanna plays the role of the wonderful Tara. When we first meet her, she is actually on the side of the evil Governor. Luckily she soon recognised her mistake and joins Rick’s group. She has become a series regular, and she certainly is one of my favorite characters. A true natural beauty. 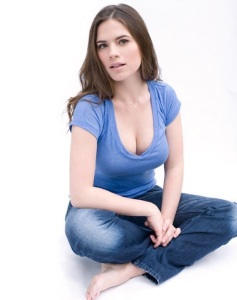 This British actress most of you will probably recognise as Agent Carter from Captain America. I had seen her in other shows and movies as well however, but really started noticing her in the television series that was made for the beloved Marvel Character. She is quite charming, but also a very strong woman, that can definitely hold her own.

If there is one woman that redefines the words Flaming Hottie, it is Eliza Dushku. I had a major crush on her when she starred as the Dark Slayer Faith in Buffy the Vampire Slayer. She has made numerous other appearances in such tv shows as Dollhouse, Angel and Banshee, but has never really broken through with her career. A true shame as she is a wonderful actress, with a stunning beauty.

My number one though has got to be Summer Glau. Also someone that I have been following since Firefly she is absolutely incredible in every sense of the word. Sadly though, she had appeared in so many tv series that got cancelled that people have started to think she is cursed. My favorite role from her has got to be in The Sarah Connor Chronicles, where she played the part of Cameron, the Terminator that was assigned to protect John. A bad ass role, that really suited her.

This is always the difficult part, I can only choose 7 people to tag for this, but luckily, since I got nominated twice I can do this two times. Before this becomes a thing only guys can do, I have chosen four female bloggers, and three males. In no way should you feel any obligation to do this one though, so feel free to write a post for it or not: no pressure! So here they are in no particular order: