I watched the first season of Knights of Sidonia quite a while back. (You can find my review for it here). While the series started off pretty slow, and was definitely not without it’s flaws, it eventually started to grow on me. Now recently D from Dtalksanime has started on this show, and I thought this would be as good a time as any to start watching season 2. First though, if you have not yet subscribed to the fantastic blog of D, do that first. They have great reviews on anime, post that are always a joy to read, and not only that they are great to talk to, so seriously what is there not to like: subscribe….now. So for those of you who are not exactly up to speed as to what this series is about I will give a very short discription. Obviously this anime takes place in the future. Humanity is on the brink of extinction fighting an alien race called the Gauna. A gigantic colony ship called Sidonia, is pretty much all that remains of the human race. Think Battlestar Galactica, but with subtle differences. 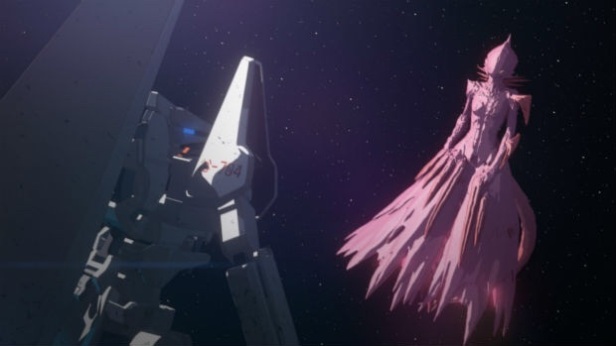 The second season of this anime continues the story that began in season 1, and picks up almost right after the end of the first season. Garde pilot Nagate Tanikaze is out with his group about to engage a new and gigantic Gauna, that threatens to destroy the Sidonia. But just when the fight is about to start a new enemy enters the scene. As if one Gauna is not enough, two are more than a handful. It is right at that moment that something strange happens. The second Gauna engages the first one, and destroys it completely. Utterly baffled by this strange behaviour, the crew of Sidonia don’t know what to make of this. Is this new Gauna friend or foe? The answer to this question lies within Sidonia itself, and might hold the key to winning the war against the Gauna once and for all.

So…Knights of Sidonia season 2. Where to begin? The first season of this anime was often criticised for it’s lack of character development. You never quite felt an emotional attachment to them, and that makes it hard to get invested in a series. With this second season it almost seems like they are trying to remedy that flaw, as the series spents much more time with the characters themselves, and focusses less on action. This would not be a bad thing were it not for the fact that this often resulted in a few pretty boring episodes, where not much of anything happened. I don’t mind slow, if it is going somewhere, but often there were just some things in the series that I felt could have been left behind.

The series shines in the episodes that featured action, and it was during those episodes that I really enjoyed it. There were a couple of very cool Mecha fight sequences, especially during the last few episodes of the series. In the end though I found this second season not quite as good as the first one. The pacing was at times simply to slow, and I felt my mind starting to wander off, which is usually not a good sign. I had hoped that this season would answer every question that was still left unanswered, but the series ends without a resolution. There is still no official confirmation that this series will get a third season. But I honestly wonder if I will even bother watching it when it does get a release. I was pretty disappointed by this second season. Still, there are enough moments that do make it a worthwhile watch, especially if you liked the first season. Just be prepared to not see anything really surprising though.